SAR images from the Copernicus Sentinel 1 satellite mission can be used to derive the distribution of atmospheric water vapor over large areas at a very high spatial resolution. A novel algorithm was developed and implemented to extract such snapshots for meteorological applications.

Numerical Weather Prediction Models (NWPM) can exploit high-resolution water vapor maps to improve weather forecasts. These maps can be generated using space borne Synthetic Aperture Radar (SAR), with resolutions of up to 400m, well below the minimum threshold required by NWPMs. The generated maps are also large: a single Sentinel-1 frame is 250km x 170km, and more than one frame can be used to cover even larger areas. The temporal resolution is limited by the revisit time of the satellite, which, in the case of Sentinel-1, is 6/12 days.

The algorithm developed in the framework of the TWIGA project is fast and robust. Classical Permanent Scatterers (PS) processors can take hours to obtain the same results that the proposed method produces in less than 1 hour!

The processing output is a stack of water vapor maps relative to an unknown ‘master’ map. The absolute maps can be calculated using external information from a NWPM. This process is often called absolutization, and in the TWIGA project, a lot of effort has been spent investigating the best absolutization algorithm.

Before the absolutization process, however, it is crucial to calibrate relative maps. Orbital inaccuracies of the satellite may generate artifacts that must be corrected. In the TWIGA project, a cross-calibration between SAR and GNSS data has been proposed to estimate and compensate for orbital errors. This leads to centimeter-level accuracy in estimating the differential and, in turn, the absolute water vapor products. 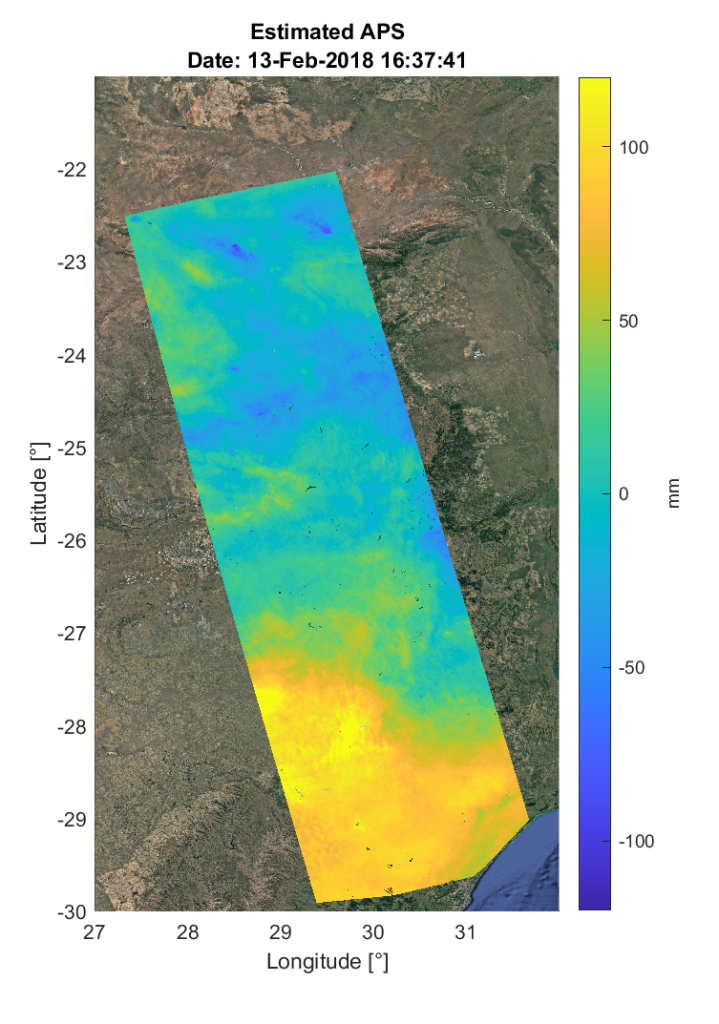 Estimated Atmospheric Phase Screen over South Africa expressed as the relative number of equivalent millimeters of water. The map is 250km by 850km long.

This research has received funding from the European Union’s Horizon 2020 Research and Innovation Program under grant agreement No.776691.

The main application of this tool is to identify where ground monitoring is most valuable. TWIGA services that depend on precipitation data, either from classical monitoring or through citizen sensing, can benefit from this tool in assessing their monitoring costs.